Why is it called Python?

As we know Guido Van Rossum is the creater of Python programming language. When he began implementing Python, Guido van Rossum was also reading the published scripts from “Monty Python’s Flying Circus”. It’s a popular BBC comedy series from the 1970s. Guido Van Rossum extracted the name ‘Python’ from this comedy series “Monty Python’s Flying Circus”. Since he needed a name that was short, unique, and slightly mysterious, so he decided to call the language Python.

Who is the Father of Python?

The Python programming was designed in the late 1980s, and Guido van Rossum started its implementation in December 1989, at CWI in the Netherlands. Guido Van Rossum is Python’s principal author, and hence rightly called the father of Python Programming language. The Python Language was released first in 1991.

Note: The CWI stands for Centrum Wiskunde & Informatica, that is – National Research Institute for Mathematics and Computer Science. It is located at the Amsterdam Science Park. This institute is famous as the creation ground of the Python Programming Language. (courtesy – wikipedia.org)

Why To Start Learning Python Programming?

Python is a feature rich object oriented programming language, so its popularity is rapidly growing among the programmers of the world.

Python is the One of Top Ten Programming Languages

Since Python is simple, portable, objet oriented and a general purpose programming language, therefore, Python has got a prominent place in the Top Ten Programming Languages of today.

Python is portable. Python runs on many Unix variants, on the Mac, and on Windows operating systems. Python is available across many platforms including Windows, Linux and Mac OS. Python is an interpreted and interactive programming language that supports object-oriented paradigm.

Python is Easy To Learn

Python is easy to learn programming language. Its syntax is very short and easy to read and write.

Python programs are shorter in terms of lines of code, because of its beautiful and short syntax.

Availability of External Libraries for Python 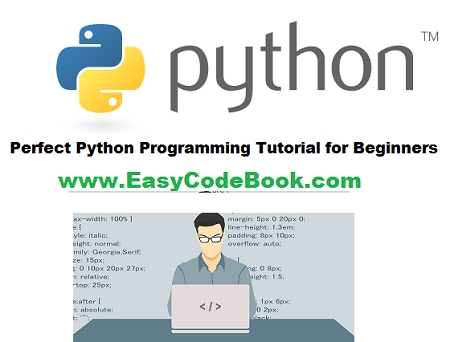 Where the Stable Releases of Python are Available?

How To Learn Python Programming Language

You can easily start learning Python as your first programming language because of its short and clear syntax. Use our perfect Python programming tutorial for beginners.

You will learn practical Python programming by Writing Example Programs yoursel in a Python IDE like IDLE. You will write programs, compile programs, edit and debug programs and finally execute your Python programs successfully on your computer.

Installing and Using Python on Your Computer

How to get input from the User

Python input function to Get Input from user at run time

Explain the Use of Python Comments

Python if Statement – Different Forms of if with Examples

How to Use Python Ternary Operator or Conditional Expressions

The Python while loop Syntax, Flowchart, Working, with Real World Examples
Python for loop Syntax & Examples
Use of range() function in for loop with Examples

Use of break and continue in Python with Examples