Python GCD Program with for statement – This Programming tutorial will explain a simple logic and Python code to find GCD. A simple for loop statement is used to calculate Greatest common Divisor of the two given numbers.

GCD is a short for Greatest Common Divisor. Therefore, GCD of two numbers is the largest number that divides both the given numbers. 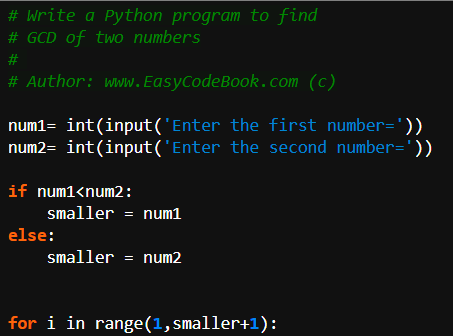 Python GCD Program with for statement

Step 1: Find the divisiors of given numbers:

Step 2: Find the greatest number which is common in both lists, hence GCD is 10.

1. First of all we find the smaller of the two numbers. For example, 20 is smaller than 30.
2. Now we start a loop from 1 to the smaller number. For example from 1 to 20.
3. We will divide the given numbers num1 and num2 by i.
4. Whenever i will divide the both numbers evenly, we set gcd=i
5. Therefore at the end gcd=10 which is the last and greatest common divisor of both 20 and 30.