Guido van Rossum is the creator of the Python

Guido van Rossum is the creator of the Python Programming Language. Guido van Rossum developed Python and first release of the Python programming language was in 1991. He is a Dutch Programmer. He was born on 31 January 1956. He grew up in the Netherlands. In 1982, he qualified his Master’s Degree in Computer Science and Mathematics from the University of Amsterdam. 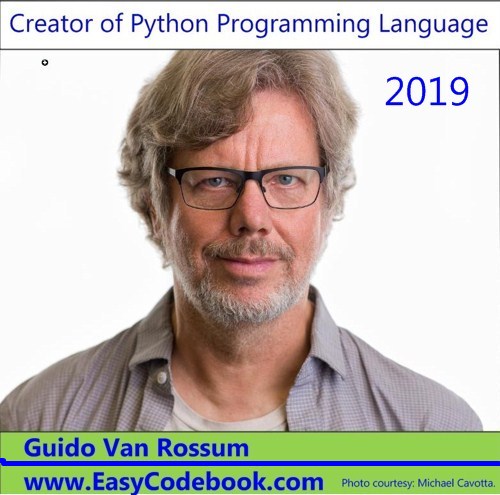 His first job after college was as a programmer at CWI. Guido van Rossum worked on the ABC language while working at CWI. Python was conceived in the late 1980s as a successor to the ABC language. Python 2.0, released in 2000, introduced features like list comprehensions and a garbage collection system capable of collecting reference cycles. Python 3.0, released in 2008, was a major revision of the language that is not completely backward-compatible, and much Python 2 code does not run unmodified on Python 3.

In 2005 he joined Google, as a Senior Staff Engineer. He started working for Dropbox in 2013, as a Principal Engineer.

Guido van Rossum had been the “Benevolent dictator for life” (BDFL)

He had been the “Benevolent dictator for life” (BDFL) until he stepped down from the position in July 2018.

had been the “Benevolent dictator for life” (BDFL)

In October 2019 he announced his retirement. But he is still deeply involved in the Python community.