What is a Sentinel Controlled Loop inPython?

A Sentinel Controlled Loop is a loop whose execution depends upon a special value. This sentinal controlled loop is terminated if a special value called sentinel value is encountered. 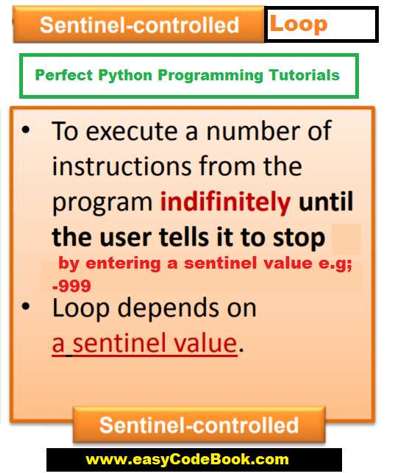 The sentinel controlled loops are conditional loops. For example we can use a while loop as a sentinl controlled as follows:

Suppose that we have to take n nubers from the user at run time and to show their sum. We do not know the value of n in advance. It depends on the will of the user if he / she enters 10 numbers, 20 numbers or 31 numbers.

Solution to this Problem by Sentinel Controlled Loop

Suppose we choose -999 as sentinel value. Therefore we will use a while loop to take a number from user repeatedly and sum it as long as it is not -999. The loop will terminated if the user enters -999.

Here is the complete program to solve this problem using a while loop as sentinel controlled loop.

How this sentinel controlled loop works?

First of all the user input a number 2 before entering in loop.

The loop condition verifies num=2 is not equal to -999, so the control will enter into loop body. Note that sum is initialized to 0 before loop.

The Python while loop Syntax, Flowchart, Working, with Real World Examples
Python for Statement Syntax & Examples
Use of range() function in for loop with Examples