Topic: Python Program To Print a to z using for loop and chr() function 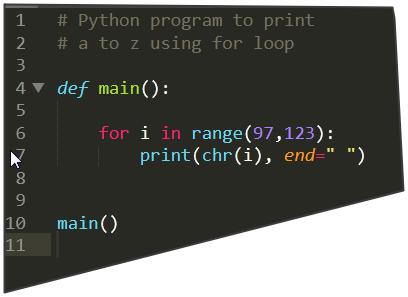 Therefore we will use a range() function in a for loop with arguments 97, 123. This for loop will print a to z alphabets.

The output will be as follows:

How This Program will work?

Actually, the for loop is the main statement in this program to print a to z alphabets using a loop.

The output of the range(97,123) function is the sequence from 97 through 122. We use this range() function with the list of lower case alphabets in our mind.

Similarly we can use a function chr(97) to print character represented by the ascii code 97.

Therefore, we get a list of alphabets in lower case using the above mentioned for loop, which is the required output in this program.

You will also like the following program in Python

Python Program to Print A to Z using for Loop